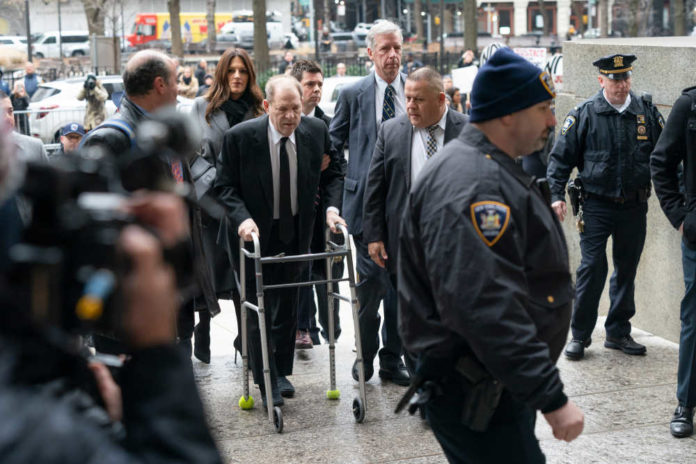 (NewsGlobal.com)- Harvey Weinstein, a former Hollywood film mogul and convicted rapist was unsuccessful in getting a judge to postpone his October hearing on Monday. However, Los Angeles Superior Court Judge Lisa Lench approved Weinstein’s request to restore his missing teeth.

Due to the January release of the Maria Schrader-directed movie, “She Said,” which is based on two New York Times journalists named Jodi Kantor and Megan Twohey who revealed Weinstein’s history of abuse and sexual misconduct against women, attorneys for Weinstein had requested that the judge postpone the trial.

The movie will debut on November 18 and is being produced by Hollywood icon Brad Pitt.

The defense team for Weinstein had suggested that the trial’s potential jurors become biased due to the movie’s attention.

According to Harvey Weinstein’s lawyer Mark Werksman, pre-release publicity would be “aimed at ginning up a deep contempt for Harvey Weinstein.” Werksman added, “This isn’t some indie picture that will quietly disappear from the public scene. Pitt’s presence in the movie could generate even more buzz.”

As reported by Rolling Stone, Werksman reiterated his remarks before the judge on Monday, calling his client’s situation “unique” and asserting that Weinstein’s “notoriety and his place in our culture at the core of the firestorm that is the #MeToo movement is true.”

His lawyer said they’re trying to do everything they can to avoid having a trial when there will be a swirl of negative publicity about him that would lead potential jurors to adopt biases.

Lench, who can screen and educate juries, declined the request on Monday, stating that while there may be a lot of publicity surrounding the movie, it is doubtful that this will affect the jurors.
Weinstein’s counsel also cited the 2020 decision of New York’s highest court on his rape and sexual assault conviction as a reason to delay the trial.

The judge rejected that argument and said she wouldn’t wait out New York’s appeal.

She admitted it would be hard to avoid what they did in New York.

The judge allowed Weinstein to have “restorative” dental work before the trial so “he doesn’t seem destitute and dirty.”

Weinstein, 70, was convicted of rape and criminal sexual behavior in February 2020. He was extradited to a Los Angeles jail last year after being sentenced to 23 years in state prison.