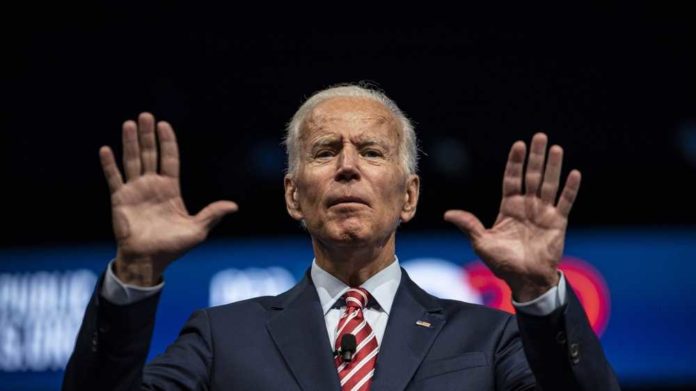 On Sunday night, Joe Biden made a trip to Westchester County, New York, to make a speech at a Democrat campaign event.

It seemed he didn’t understand a word of what he was saying. He was unsure about where he was.

Joe was heckled during his brief speech and responded in his old-fashioned manner, “Let him holler.”

He then nearly collapsed as he tripped. The scene is typically quite pitiful.

Joe Biden is getting close to being 80. He simply is unable to keep up with his demanding schedule.

“Whoops! Stepping on a – uh anyway!” Biden said as he almost went down.

It always appears to be after his bedtime.

Biden was canvassing for the New York Democratic ticket and Governor Kathy Hochul.

The Hudson Valley had a series of high-profile national Democratic visits to increase turnout, with Biden’s speech in Yonkers being the final one.

The president visited a month after he spoke at IBM in Poughkeepsie to promote his administration’s Science and CHIPS Act and a week after his wife, Jill, served as the featured speaker at a fundraiser in New Castle for Rep. Sean Patrick Maloney, D-Cold Spring.

Biden urged the kids to cast ballots to preserve American democracy. He proclaimed, “You are the best educated, the least prejudiced, and the most involved generation.” “Democracy is perpetuated if you turn out to vote.”

Republicans also praised the uncommon presidential attendance, even if Democrats hailed it as a cause for celebration, with some calling the gathering “energizing.” The right sees it as the left not taking New York for granted any longer.

Samuel Abrams, a politics professor at Sarah Lawrence College, questioned whether the president would inspire students and Westchester voters with his message before the rally.

Voters are fed up with crime, inflation, and dysfunctional governance. This is where the hostility lies.

The largest applause for Biden came when he mentioned two of his flagship initiatives for the younger generation: the cancellation of up to $20,000 in student debt, which has weathered legal challenges to its validity, and investment in climate change technology.

“The MAGA Republicans are attempting to block it, and it will give you some breathing room,” according to Biden.