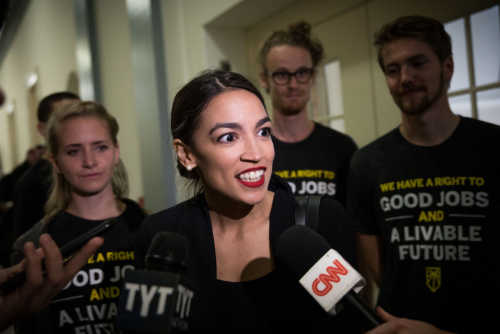 But, this week, the progressive head of “The Squad” in the House of Representatives seemed to side with a conservative viewpoint.

“The railways and workers should go back and negotiate a deal that the workers, not just the union bosses, will accept. I will not vote to impose a deal that doesn’t have the support of rail workers.”

“Glad we are on the same page [regarding] railworkers’ paid sick days.”

Democrats have historically counted the working class among their most ardent supporters. In recent years, though, that has flipped.

The working class in America was traditionally the envy of all modern economies across the world. Here, working class employees had job security and wages that were unmatched across the globe.

The Democratic Party was the one that was always vigilantly guarding the interests of the working class. This, in turn, gave them a huge bloc of voters that they could consistently count on.

It all started with the New Deal that was struck under President Franklin Roosevelt in the early 1930s, but that shriveled up in the last few years as liberals abandoned that formula that used to work so well for them. Instead, they were opting to side with the upper-level elites in business, siding more with unions and less with the actual workers themselves.

Republicans have been able to capitalize on that in recent years, highlighted by the victory of former President Donald Trump in 2016 where he got a huge following from the working class.

It’s something that Harrison Kass pointed out in an op-ed he wrote for media outlet 1945 recently. In his op-ed, he wrote:

Now, it seems some of the younger members of the Democratic Party in Washington are starting to realize that they need this working class back on their side if they want to push their agenda for the long haul.

“The Republicans, who sense an opening, and are posturing (i.e., Rubio with his tweet) are a formidable threat to Democrats hoping to reclaim working-class trust.”

It’s going to be a big battle that the two political parties are going to be fighting for the next few years and that will be critical in the race for power in Washington. As Kass concludes in his op-ed:

“The race for the working class is on. The winner may well shape U.S. politics for the next generation.”